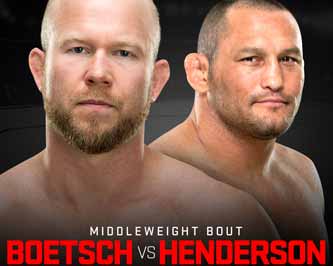 Review by AllTheBestFights.com: 2015-06-06, fight not particularly good between Tim Boetsch and Dan Henderson: it gets two stars.

Tim Boetsch entered this fight with a professional mma record of 18-8-0 (72% finishing rate) and he is ranked as the No.20 middleweight in the world while his opponent, the 44-year-old (ten years older than Boetsch) and former Ufc, Pride and Strikeforce champion Dan Henderson, has an official record of 30-13-0 (53% finishing rate) and he entered as the No.17 in the same weight class. Both fighters won just once in their last three bouts: Boetsch lost to Luke Rockhold (Rockhold vs Boetsch), then he beat Brad Tavares (=Boetsch vs Tavares) and he lost again, with Thales Leites (=Boetsch vs Leites); ‘Hendo’ won the rematch over Mauricio ‘Shogun’ Rua (=Rua vs Henderson 2) but then he suffered two consecutive defeats, against Daniel Cormier (=Henderson vs Cormier) and Gegard Mousasi (=Henderson vs Mousasi). Boetsch vs Henderson is the main event of UFC Fight Night 68. Watch the video and rate this fight!