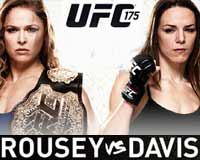 Review: 2014-07-05, great start between Ronda Rousey and Alexis Davis: it gets three stars (UFC Performance of the Night). The undefeated black belt in judo Ronda Rousey entered this fight with a perfect mma record of 9-0-0 (100% finishing rate, with only one victory by ko/tko) and she is ranked as the No.1 women’s bantamweight in the world, she has already defended her Ufc Bw title in February against Sara McMann (=Rousey vs McMann).
Her opponent, the black belt in Brazilian jiu-jitsu Alexis Davis, has a record of 16-5-0 (56% finishing rate) and she entered as the No.2 in the same weight class, she has already fought in 2014 beating Jessica Eye (via split decision). Rousey vs Davis is valid for the Ufc women’s bantamweight title; undercard of Chris Weidman vs Lyoto Machida – UFC 175. Watch the video and rate this fight!

(Free embeddable video hosted on Youtube and not uploaded by AllTheBestFights, to report it please visit this link where the video is hosted)