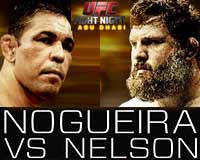 Review: 2014-04-11, spectacular finish between Antonio Rodrigo Nogueira and Roy Nelson: it is close to get four stars (UFC Performance of the Night). Antonio Rodrigo ‘Minotauro’ Nogueira entered this fight with a professional mma record of 34-8-1 (71% finishing rate) and he is ranked as the No.13 heavyweight in the world, he is a black belt in Brazilian jiu-itsu (4th segree) and judo; he fought just once in 2013 losing to Fabricio Werdum in their rematch (via submission: Nogueira vs Werdum 2).
His opponent, Roy Nelson, has an official record of 19-9-0 (89% finishing rate) and he entered as the No.12 in the same weight class, he is also a black belt in bjj and he fought three times last year but he won just the first bout against Cheick Kongo (=Nelson vs Kongo) and then he lost to Stipe Miocic (=Nelson vs Miocic) and Daniel Cormier (=Cormier vs Nelson). ‘Minotauro’ Nogueira vs Nelson is the main event of UFC Fight Night 40 – Ufn. Watch the video and rate this fight!