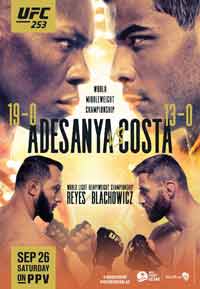 Review by AllTheBestFights.com: 2020-09-27, great fight between Kai Kara-France and Brandon Royval: it gets three stars (UFC Fight of the Night).
Kai Kara France entered this fight with a mma record of 21-8-0 (57% finishing rate) and he is ranked as the No.13 flyweight in the world. He lost to Brandon Moreno last year but he comes back to win against Tyson Nam in 2020.
His opponent, Brandon Royval, has an official record of 11-4-0 (91% finishing rate) and he entered as the No.11 in the same weight class. He was defeated by Casey Kenney in 2018 but then he has won over Joby Sanchez, Nate Williams and Tim Elliott. Royval vs France is on the undercard of Israel Adesanya vs Paulo Costa – UFC 253. Watch the video and rate this fight!