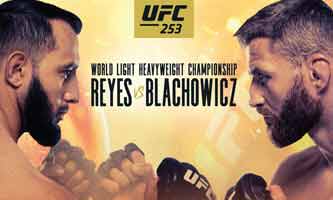 Review by AllTheBestFights.com: 2020-09-27, pretty good finish between Dominick Reyes and Jan Blachowicz but it is not enough to get three stars: it gets two (UFC Performance of the Night). Moreover this match was ranked in the ‘Top 10 Mma Fights of the Year 2020‘ (ranking generated by our users).
Dominick Reyes entered this fight with a pro mma record of 12-1-0 (75% finishing rate) and he is ranked as the No.8 light heavyweight in the world but he comes off his first loss suffered against current #1 light-Hw Jon Jones (controversial decision, Jon Jones vs Dominick Reyes); before this bout he had fought twice in 2019, beating Volkan Oezdemir (Dominick Reyes vs Volkan Oezdemir) and Chris Weidman (Dominick Reyes vs Chris Weidman).
His opponent, the black belt in Bjj and former Ksw light-Hw champion Jan Blachowicz, has a record of 26-8-0 (62% finishing rate) and he entered as the No.3 in the same weight class. He lost to Thiago Santos at the beginning of 2019 (Jan Blachowicz vs Thiago Santos) but then he has won over Luke Rockhold (Luke Rockhold vs Jan Blachowicz), Ronaldo Jacare Souza (Jan Blachowicz vs Ronaldo Jacare Souza) and Corey Anderson in their rematch (Corey Anderson vs Jan Blachowicz 2). Blachowicz vs Reyes is valid for the vacant UFC light-heavyweight title; undercard of Israel Adesanya vs Paulo Costa – UFC 253. Watch the video and rate this fight!