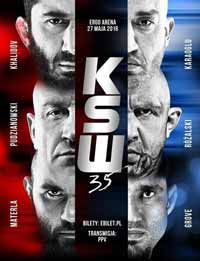 Review by AllTheBestFights.com: 2016-05-27, fight not particularly good between Mariusz Pudzianowski and Marcin Rozalski: it gets two stars.

The former World’s Strongest Man champion Mariusz Pudzianowski entered this fight with a pro record of 9-4-0 (56% finishing rate) while his opponent, Marcin Rozalski, has an official mma record of 5-4-0 (80% finishing rate). Pudzian fought twice last year beating Rolles Gracie (=Pudzianowski vs Gracie) and losing to Peter Graham (=Pudzianowski vs Graham) while Rozalski comes off two consecutive defeats, against Peter Graham in 2014 (=Graham vs Rozalski) and James McSweeney in 2015. Pudzianowski vs Rozalski is on the undercard of Mamed Khalidov vs Aziz Karaoglu – KSW 35. Watch the video and rate this fight!