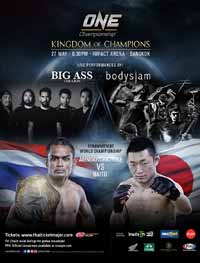 Review by AllTheBestFights.com: 2016-05-27, good exchanges between Marat Gafurov and Kazunori Yokota: it gets three stars.

The undefeated Marat Gafurov entered this fight with a pro mma record of 13-0-0 (77% finishing rate) and he is ranked as the No.19 featherweight in the world. He fought three times in 2015 winning over Ev Ting, Martin Nguyen (=Gafurov vs Nguyen) and Jadambaa Narantungalag (=Gafurov vs Narantungalag).
His opponent, Kazunori Yokota, has a record of 25-5-3 (36% finishing rate) and he entered as the No.46 in the same weight class. He suffered his last loss when he faced Jadambaa Narantungalag in 2010, since then he has collected 13 consecutive victories beating Masakazu Imanari in his last one. Gafurov vs Yokota is valid for the One featherweight title (held by Gafurov); undercard of Dejdamrong Sor Amnuaysirichoke vs Yoshitaka Naito – ONE FC 43. Watch the video and rate this fight!

Event: One Championship 43: Kingdom of Champions