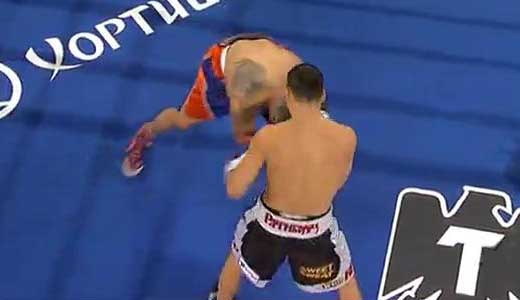 Review: 2013-10-19, Mike Alvarado vs Ruslan Provodnikov was a really exciting fight as we expected. Alvarado came off three consecutive spectacular fights: two fights of the year candidate as Alvarado vs Herrera and Rios vs Alvarado 1 in 2012 and a great battle against Brandon Rios in their second fight, but also the Russian boxer came off the candidate for Fight of the Year 2013, a very controversial defeat against Timothy Bradley…
In this fight Provodnikov was the aggressor but Alvarado likes toe-to-toe fights and exchanging shot for shot, so the result was an action packed fight with also two knockdowns and a “touching finish” with the winner in tears hugging his mother: Alvarado vs Provodnikov is definitely one of the best boxing fights of 2013, four stars! Mike Alvarado (34-1-0, 23 KOs) entered as the No.4 light welterweight in the world while Ruslan Provodnikov (22-2-0, 15 KOs) entered as the No.6 (currently the #1 in this weight division is Danny Garcia). Alvarado vs Provodnikov is valid for the WBO light welterweight title (Alvarado’s first defense). Watch the video!