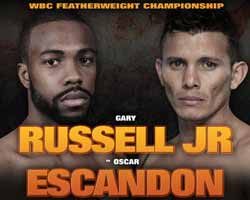 Review by AllTheBestFights.com: 2017-05-20, nice and tough fight between Gary Russell Jr and Oscar Escandon: it gets three stars.

The Wbc Fw champion Gary Russell Jr entered this fight with a professional boxing record of 27-1-0 (16 knockouts) while his opponent, Oscar Escandon, has an official record of 25-2-0 (17 knockouts). Both boxers are not ranked as they haven’t fought for more than one year: Russell had suffered his only loss in 2014 when he faced Vasyl Lomachenko (via majority decision, Lomachenko vs Russell) but then he has won three bouts beating Patrick Hyland in his last one (=Russell vs Hyland) while Escandon had lost to Moises Flores in 2015 (via split decision, Escandon vs Flores) and he came back to win against Robinson Castellanos in 2016 (=Castellanos vs Escandon). Gary Russell Jr vs Oscar Escandon is valid for the WBC World featherweight title. Watch the video and rate this fight!