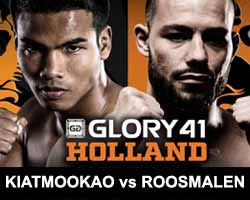 Review by AllTheBestFights.com: 2017-05-20, great fight between Robin van Roosmalen and Petchpanomrung Kiatmookao: it gets three stars.

The former Glory Lw and Glory Fw champion Robin van Roosmalen entered this fight with a kickboxing record of 48-16-3 (13 knockouts) and he is ranked as the No.3 welterweight in the world. He lost the rematch with Sitthichai Sitsongpeenong last year (=Roosmalen vs Sitthichai 2) but then he has beat Gabriel Varga (=Varga vs Roosmalen) and Matt Embree (=Roosmalen vs Embree).
His opponent, the former WMC champion and top-ten ranked in the Lumpinee and Rajadamnern stadiums Petchpanomrung Kiatmookao (also known as Petpanomrung Kiatmoo9), has an official record of 156-35-2 (25 knockouts) and he entered as the No.7 in the same weight class. He has already fought three times in 2017 losing to Wei Rui and winning over Aleksei Ulianov and Serhiy Adamchuk. Robin van Roosmalen vs Petchpanomrung Kiatmookao is valid for the Glory featherweight title (they also faced each other a second time on September 29, 2018, Robin van Roosmalen vs Petchpanomrung Kiatmookao 2); undercard of Hesdy Gerges vs Tomas Hron – Glory 41. Watch the video and rate this fight!