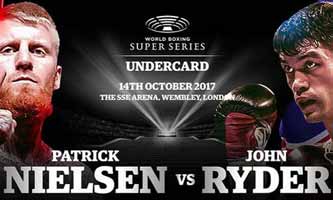 Review by AllTheBestFights.com: 2017-10-14, pretty good finish between John Ryder and Patrick Nielsen but it is not enough to get three stars: it gets two.

Patrick Nielsen entered this fight with a professional record of 29-1-0 (14 knockouts) and he is ranked as the No.27 super middleweight in the world. He suffered his only loss when he faced Dmitry Chudinov in 2014 (=Nielsen vs Chudinov), since then he has collected seven consecutive victories beating Beibi Berrocal in 2017.
His opponent, John Ryder, has a boxing record of 24-4-0 (12 knockouts) and he entered as the No.48 in the same weight class but he lost two out of his last three fights, against Jack Arnfield (=Ryder vs Arnfield) and Rocky Fielding, between these two bouts he had beat Adam Etches. Ryder vs Nielsen is on the undercard of George Groves vs Jamie Cox. Watch the video and rate this fight!