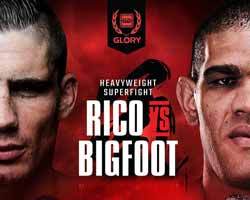 Review by AllTheBestFights.com: 2017-10-14, disappointing fight between Rico Verhoeven and Antonio Silva: it gets two stars.

The Glory Hw champion Rico Verhoeven entered this fight with a pro kickboxing record of 51-10-1 (14 knockouts) and he is ranked as the No.1 heavyweight in the world. He lost to Andrei Herasimchuk in 2015 (=Verhoeven vs Herasimchuk) but then he has won seven consecutive fights beating Anderson Braddock Silva (= Verhoeven vs Silva), Badr hari (=Verhoeven vs Hari) and Ismael Lazaar in his last three (=Verhoeven vs Lazaar).
His opponent, the black belt in judo, karate and Brazilian jiu-jitsu Antonio ‘Bigfoot’ Silva, is at his professional kickboxing debut but he has a mma record of 19-12-0 (89% finishing rate). He entered as the No.37 in the mma heavyweight division but he comes off five consecutive losses, the last one with Vitaly Minakov (=Minakov vs Bigfoot Silva). Verhoeven vs Silva is on the undercard of Simon Marcus vs Alex Pereira – Glory 46. Watch the video and rate this fight!