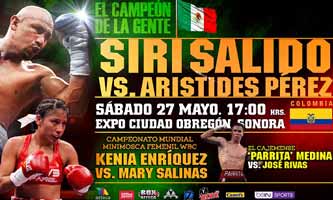 Review by AllTheBestFights.com: 2017-05-27, nice and tough fight between Orlando Salido and Aristides Perez: it gets three stars.

The former world champion in two different weight classes Orlando Salido entered this fight with a record of 43-13-4 (30 knockouts) and he is ranked as the No.4 super featherweight in the world (currently the #1 in this division is Vasyl Lomachenko) but his last victory occurred in 2014, against Terdsak Kokietgym (4-stars fight, Salido vs Kokietgym). After this fight ‘Siri’ Salido lost to Roman Martinez (=Salido vs Martinez I) and drew twice: with Martinez in their rematch (=Martinez vs Salido II) and with Francisco Vargas (2016 Fight of the Year candidate, Vargas vs Salido).
His opponent, Aristides Perez, has a boxing record of 30-9-2 (16 knockouts) and he replaces Amphon Suriyo (also known as Pharanpetch Tor Buamas). He was defeated by Emiliano Marsili in 2016 but he came back to win in 2017 against Manuel Palomino. Orlando Salido vs Aristides Perez is the main event of the evening. Watch the video and rate this fight!