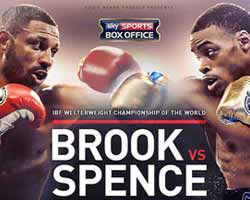 Review by AllTheBestFights.com: 2017-05-27, great fight between Kell Brook and Errol Spence Jr: it gets three stars.

The Ibf Ww champion Kell Brook entered this fight with a professional record of 36-1-0 (25 knockouts) and he is ranked as the No.5 welterweight in the world (currently the #1 in this division is Manny Pacquiao). He suffered his only loss when he moved up in weight class in his last fight, against Gennady Golovkin (4-stars fight, Golovkin vs Brook); before this bout he had beat Kevin Bizier (=Brook vs Bizier).
His opponent, the undefeated Errol Spence Jr, has a perfect boxing record of 21-0-0 (18 KOs=86%) and he entered as the No.7 in the same weight class. He fought twice last year winning over Chris Algieri (=Spence vs Algieri) and Leonard Bundu (=Spence Jr vs Bundu). Errol Spence vs Kell Brook is valid for the IBF World welterweight title (Brook’s fourth defense). Watch the video and rate this fight!