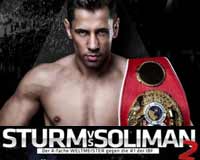 Review: 2014-05-31, dirty boxing with too much clinching: the second fight between Felix Sturm and Sam Soliman gets two stars. Felix Sturm entered this fight with a professional boxing record of 39-3-2 (18 knockouts) and he is ranked as the No.2 middleweight in the world, last year he faced Soliman for the first time and he lost (=Sturm vs Soliman I), but after the bout the BDB (the German boxing federation) suspended the Australian for doping and the result was changed into a “no-contest”. After that fight Sturm has fought and won twice: against Predrag Radosevic (=Sturm vs Radosevic) and Darren Barker (=Barker vs Sturm).
His opponent, the 40-year-old Sam Soliman (five years older than Sturm), has an official record of 43-11-0 (18 knockouts) and he entered as the No.5 in the same weight class, he suffered his last defeat in 2008 when he faced Anthony Mundine for the WBA World super-Mw title, since then he has collected eight wins and one no-contest; currently the #1 in this division is Gennady Golovkin. Sturm vs Soliman 2 is valid for the IBF middleweight title (Sturm’s first defense). Watch the video and rate this fight!