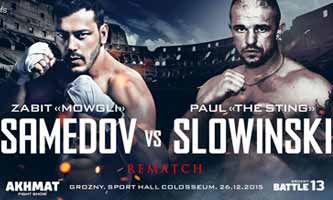 Review by AllTheBestFights.com: 2015-12-26, nice and tough fight between Zabit Samedov and Paul Slowinski: it gets three stars.

Zabit Samedov entered this fight with a professional kickboxing record of 75-9-1 (35 knockouts) and he is ranked as the No.8 heavyweight in the world. He suffered his last defeat in 2013 when he faced Badr Hari in their rematch (=Hari vs Samedov 2), since then he has won 11 consecutive bouts taking revenge on Hari in their third fight (=Hari vs Samedov 3) and beating Dzevad Poturak in his last bout (=Samedov vs Poturak).
His opponent, the former Iska and Wmc world champion Paul Slowinski, has an official record of 106-21-1 (63 knockouts) but he is not ranked as he hasn’t fought since June 14, 2014 when he defeated Tsotne Rogava; before this bout he had lost to Raul Catinas (=Catinas vs Slowinski). In their first fight Samedov was defeated by Slowinski in just one round (June 23, 2007); this second bout is the main event of “Akhmat Fight Show – Grozny Battle 13”. Watch the video and rate this fight!