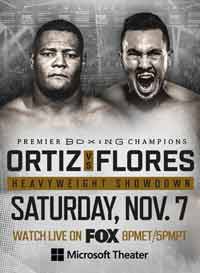 Review by AllTheBestFights.com: 2020-11-07, pretty good finish between Frank Sanchez and Brian Howard but it is not enough to get three stars: it gets two.
The undefeated Frank Sanchez entered this fight with a perfect record of 15-0-0 (11 knockouts) and he is ranked as the No.40 heavyweight in the world. In his last three fights he has won over Victor Bisbal, Jack Mulowayi and Joey Dawejko (Frank Sanchez vs Joey Dawejko).
His opponent, Brian Howard, has an official boxing record of 15-3-0 (12 KOs=80%) and he entered as the No.41 in the same weight class. He fought three times last year beating Garrett Wilson and Carlos Negron but between these two fights he lost to Richard Rivera. Howard vs Sanchez is valid for the WBO NABO heavyweight title; undercard of Luis Ortiz vs Alexander Flores. Watch the video and rate this fight!