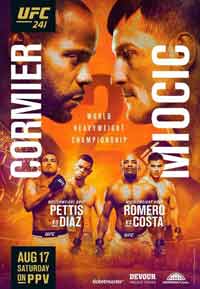 Review by AllTheBestFights.com: 2019-08-17, some good exchanges between Cory Sandhagen and Raphael Assuncao but it is not enough to get three stars: it gets two.

Cory Sandhagen entered this fight with a pro record of 11-1-0 (64% finishing rate) and he is ranked as the No.8 bantamweight in the world (currently the #1 in this division is Henry Cejudo). He suffered his only loss when he faced Jamall Emmers in 2017, since then he has won six bouts defeating Mario Bautista and John Lineker in 2019 (John Lineker vs Cory Sandhagen).
His opponent, the black belt in Brazilian jiu-jitsu Raphael Assuncao, has an official mma record of 27-6-0 (52% finishing rate) and he entered as the No.12 in the same weight class but he comes off the loss against Marlon Moraes (Raphael Assuncao vs Marlon Moraes 2); before this bout he had beat Rob Font (Raphael Assuncao vs Rob Font). Sandhagen vs Assuncao is on the undercard of Daniel Cormier vs Stipe Miocic 2 – UFC 241. Watch the video and rate this fight!