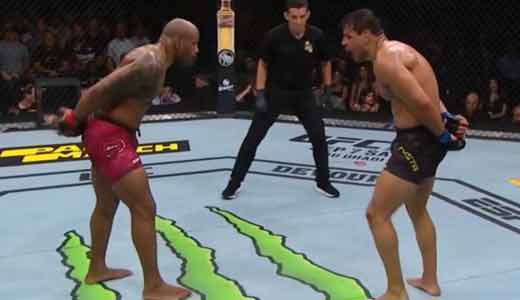 The former Olympian wrestler Yoel Romero Palacio entered this fight with a mma record of 13-3-0 (85% ko/tko victory rate – he has never won via submission) and he is ranked as the No.2 middleweight in the world but he lost two out of his last three fights, both against current #1 Ufc Mw champion Robert Whittaker (Yoel Romero vs Robert Whittaker I and Robert Whittaker vs Yoel Romero II). Between these two bouts Romero beat Luke Rockhold (Yoel Romero vs Luke Rockhold).
His opponent, the undefeated black belt in Brazilian jiu-jitsu Paulo Henrique Borrachinha Costa, has a perfect record of 12-0-0 (100% finishing rate) and he entered as the No.13 in the same weight class. In his last three fights he has won over Oluwale Bamgbose (Paulo Costa vs Bamgbose), Johny Hendricks (Johny Hendricks vs Paulo Costa) and Uriah Hall (Uriah Hall vs Paulo Costa). Romero vs Costa is on the undercard of Daniel Cormier vs Stipe Miocic 2 – UFC 241. Watch the video and rate this fight!