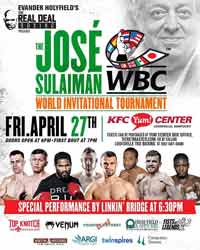 Review by AllTheBestFights.com: 2018-04-27, some good exchanges between Felix Diaz and Francisco Santana but it is not enough to get three stars: it gets two.

The 2008 Olympic light-Ww gold medalist Felix Diaz entered this fight with a professional boxing record of 19-2-0 (9 knockouts) and he is ranked as the No.13 super lightweight in the world but he comes off the loss against Terence Crawford (Terence Crawford vs Felix Diaz). Before this bout, in 2016, he had beat Sammy Vasquez (Vasquez vs Diaz) and Levis Morales.
His opponent, Francisco Santana (who replaces Derrieck Cuevas), has an official record of 24-6-1 (12 knockouts) but he is not ranked as he hasn’t fought since April 22, 2017 when he was defeated by Mahonry Montes (via split decision). Before this fight, in 2016, he had won over Ed Paredes but he had also lost to Jose Benavidez (Jose Benavidez vs Francisco Santana). Diaz vs Santana is the main event of the evening; quarterfinal of ‘The Jose Sulaiman World Invitational Tournament’. Watch the video and rate this fight!