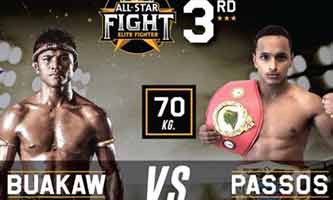 Review by AllTheBestFights.com: 2018-04-28, pretty good fight between Buakaw Banchamek and Luis Passos: it gets three stars.

The two time K-1 World MAX champion Buakaw Banchamek entered this fight with a professional kickboxing record of 234-23-12 (71 knockouts) and he is ranked as the No.10 super welterweight in the world while his opponent, Luis Passos (who replaces Niclas Larson), has an official record of 25-7-0. Buakaw has already fought twice in 2018 beating Nayanesh Ayman (Buakaw Banchamek vs Nayanesh Ayman) and losing to Jonay Risco (Buakaw Banchamek vs Jonay Risco). Buakaw vs Passos is the main event of All Star Fight 3. Watch the video and rate this fight!