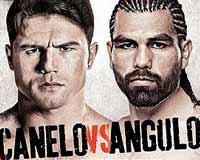 Review: 2014-03-08, exciting and tough fight between Saul Alvarez and Alfredo Angulo: it is very cloe to get four stars! The 23-year-old Saul “Canelo” Alvarez entered this fight with a professional boxing record of 42-1-1 (30 knockouts) and he is ranked as the No.1 light middleweight in the world, last year he fought twice defeating Austin Trout in April (=Alvarez vs Trout) but then he suffered his first loss facing Floyd Mayweather Jr in September (=Mayweather vs Alvarez).
His opponent, Alfredo Angulo, has an official record of 22-3-0 (18 KOs=81%) and he entered as the No.28 in the same weight class, last year he fought just once losing to Erislandy Lara (=Lara vs Angulo). Alvarez vs Angulo is the main event of the evening. Watch the video and rate this fight!

Report broken video
« 2014 BOXING fight – Kevin Satchell vs Isaac Quaye – full fight Video
2014 BOXING fight – Jorge Linares vs Nihito Arakawa – full fight Video »
HELP US!!! Since the CORONAVIRUS pandemic started, AllTheBestFights.com has struggled to survive! If you have enjoyed this website for the past 10 years, today we ask you for a little help: