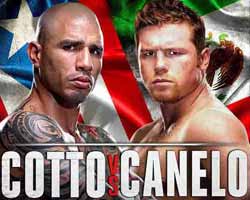 Review by AllTheBestFights.com: 2015-11-21, good fight with great action in the final: Miguel Cotto vs Saul Alvarez gets three stars.

The world champion in four different weight classes Miguel Angel Cotto entered this fight with a professional boxing record of 40-4-0 (33 KOs=82%) and he is ranked as the No.2 in the world (currently the #1 in this division is Gennady Golovkin). The Puerto Rican suffered two consecutive defeats in 2012, against Floyd Mayweather Jr (=Mayweather vs Cotto) and Austin Trout (=Cotto vs Trout), but then he has won three bouts winning the Wbc Mw title against Sergio ‘Maravilla’ Martinez (=Martinez vs Cotto) and defending it once with Daniel Geale (=Cotto vs Geale).
His opponent, the 25-year-old Saul Alvarez (10 years younger than Cotto), has an official record of 45-1-1 (32 knockouts) and he entered as the No.1 super welterweight. ‘Canelo’ also fought against Austin Trout but he won by unanimous decision in 2013 (=Alvarez vs Trout); in the same year he faced Floyd Mayweather Jr suffering his first loss (=Mayweather vs Alvarez). After this bout the Mexican has won three consecutive fights defeating James Kirkland in his last one (candidate for boxing Fight of the Year 2015, Canelo vs Kirkland). Cotto vs Canelo Alvarez is valid for the vacant WBC World middleweight title (belt held by Cotto but the Wbc stripped the Puerto Rican just four days before the fight because he refused to pay a $300,000 sanctioning fee to have the title on the line). Watch the video and rate this fight!