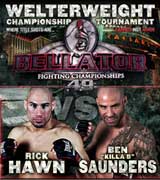 Review: 2011-09-10, good fight between Ben Saunders and Chris Cisneros (on the original fight card Ben Saunders was expected to face Rick Hawn). Saunders defeated Chris Cisneros by TKO in the third round, welterweight quarterfinal of the Bellator Fighting Championships 49. Watch the video!