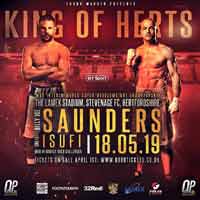 Review by AllTheBestFights.com: 2019-05-18, disappointing fight between Billy Joe Saunders and Shefat Isufi: it gets two stars.

The undefeated former Wbo Mw champion Billy Joe Saunders entered this fight with a perfect record of 27-0-0 (13 knockouts) and he is ranked as the No.4 super middleweight in the world (currently the #1 in this division is Callum Smith). In his last three bouts he has won over Willie Monroe Jr (Saunders vs Monroe Jr), David Lemieux (Billy Joe Saunders vs David Lemieux) and Charles Adamu.
His opponent, Shefat Isufi, has an official boxing record of 27-3-2 (20 knockouts) and he entered as the No.48 in the same weight class. He lost to Dariusz Sek in 2015 but since then he has won ten consecutive bouts defeating Rafael Sosa Pintos and Mohamed El Achi in 2018. Saunders vs Isufi is valid for the vacant WBO World super middleweight title. Watch the video and rate this fight!