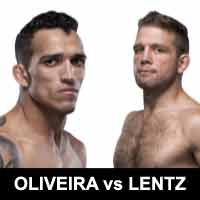 Review by AllTheBestFights.com: 2019-05-18, some good exchanges between Charles Oliveira and Nik Lentz 3 but it is not enough to get three stars: it gets two.

The black belt in Brazilian jiu-jitsu Charles Oliveira entered this fight with a professional mma record of 26-8-0 (92% finishing rate) and he is ranked as the No.7 lightweight in the world (currently the #1 in this division is Khabib Nurmagomedov). ‘Do Bronx’ Oliveira was defeated by Paul Felder in 2017 (Charles Oliveira vs Paul Felder) but then he has won four bouts beating Jim Miller (Charles Oliveira vs Jim Miller 2) and David Teymur in his last two (Charles Oliveira vs David Teymur).
His opponent, Nik Lentz, has an official record of 30-9-2 (63% finishing rate) and he entered as the No.21 in the same weight class. He lost to David Teymur last year but then he has won over Gray Maynard and Scott Holtzman. Their first bout ended in a no-contest (June 26, 2011) while in their second fight Oliveira defeated Lentz via submission (May 30, 2015 – Nik Lentz vs Charles Oliveira 2); this third fight is on the undercard of Rafael dos Anjos vs Kevin Lee – UFC Fight Night 152 (UFC on ESPN+ 10). Watch the video and rate this fight!