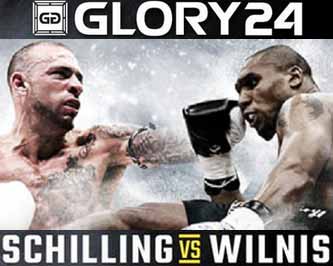 Review by AllTheBestFights.com: 2015-10-09, good fight between Joe Schilling and Jason Wilnis: it gets three stars.

The former Wbc muay thai light-Hw champion Joe Schilling entered this fight with a professional kickboxing record of 18-7-0 (11 knockouts) and he is ranked as the No.3 cruiserweight in the world. He lost to Artem Levin in 2014 (=Schilling vs Levin 2) but he came back to win in 2015 beating Robert Thomas (=Schilling vs Thomas).
His opponent, Jason Wilnis, has an official record of 24-5-1 (13 knockouts) and he entered as the No.4 in the same weight class. He has already fought three times in 2015 beating Alex Pereira (=Wilnis vs Pereira 2) and David Keclik, but between these two bouts he was defeated by Simon Marcus (=Marcus vs Wilnis). Schilling vs Wilnis, Glory middleweight title eliminator, is the main event of Glory 24 Denver. Watch the video and rate this fight!