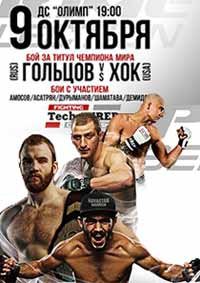 Review by AllTheBestFights.com: 2015-10-09, disappointing bout between Denis Goltsov and John Hawk: it gets two stars.

Denis Goltsov entered this fight with a professional mma record of 15-4-0 (80% finishing rate) and he is ranked as the No.28 heavyweight in the world. He suffered his last loss in 2012 when he faced Akhmed Sultanov, since then he has won ten consecutive fights beating Peter Graham (=Goltsov vs Graham) and James McSweeney in 2015.
His opponent, John Hawk, has an official record of 11-5-0 (36% finishing rate) and he entered as the No.46 in the same weight class. He lost to Josh Stansbury in 2013 and then he has won three fights. Goltsov vs Hawk is the main event of “Tech-Krep FC: Prime Selection 7”. Watch the video and rate this fight!