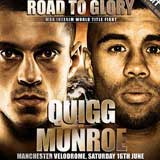 Review: 2012-06-16, unfortunatly the fight between Scott Quigg and Rendall Munroe was stopped due to accidental head clash in the third round: two stars. The undefeated Scott Quigg (24-0-0) entered as the No.17 super bantamweight in the world while Rendall Munroe (24-2-0) entered as the No.22. Quigg vs Munroe is valid for the interim WBA World super bantamweight title. Watch the video!

Their next fight: Scott Quigg vs Rendall Munroe 2

Report broken video
« 2012 BOXING fight – Julio Cesar Chavez Jr vs Andy Lee – fight Video WBC title
2012 BOXING fight – Tomasz Adamek vs Eddie Chambers – full fight Video »
HELP US!!! Since the CORONAVIRUS pandemic started, AllTheBestFights.com has struggled to survive! If you have enjoyed this website for the past 10 years, today we ask you for a little help: