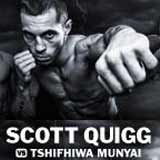 Review: 2014-04-19, pretty good finish but it is not enough to get three stars: Scott Quigg vs Tshifhiwa Munyai gets two. The undefeated Scott Quigg entered this fight with a professional boxing record of 27-0-2 (20 knockouts) and he is ranked as the No.9 super bantamweight in the world, his only two draws came in world title fights: the first time against Rendall Munroe during their first bout in 2012 (=Quigg vs Munroe, but after five months Quigg won the rematch by tko Quigg vs Munroe 2) and the second time against the undefeated Yoandris Salinas in 2013 (=Quigg vs Salinas).
His opponent, Tshifhiwa Munyai, has an official record of 24-2-1 (12 knockouts) and he entered as the No.19 in the same weight class, he suffered his last defeat in 2010 when he faced Christian Esquivel for the vacant WBC silver bantamweight title, since then he has fought and won four times; currently the #1 in this division is Guillermo Rigondeaux. Quigg vs Munyai is valid for the WBA World super bantamweight title, belt held by Quigg (first world title shot for Munyai). Watch the video and rate this fight!

Where: Phones 4u Arena, Manchester, UK