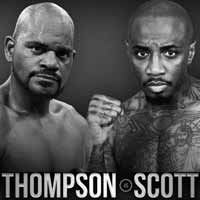 Review by AllTheBestFights.com: 2015-10-30, disappointing fight between Tony Thompson and Malik Scott: it gets two stars.

Tony Thompson entered this fight with a pro boxing record of 40-5-0 (27 knockouts) and he is ranked as the No.7 heavyweight in the world (currently the #1 in this division is Wladimir Klitschko). He lost to Carlos Takam last year (=Takam vs Thompson) but he came back to win in 2015 beating Odlanier Solis (=Solis vs Thompson 2).
His opponent, Malik Scott, has a record of 37-2-1 (13 knockouts) and he entered as the No.23 in the same weight class. He fought three times in 2014 winning over Grover Young and Alex Leapai but between these two bouts he was defeated by Deontay Wilder (=Wilder vs Scott). Thompson vs Scott is the main event of the evening. Watch the video and rate this fight!

Where: The Venue at UCF, Orlando, Florida, USA