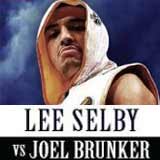 Review: 2014-10-11, good finish but the rest of the fight was pretty boring: Lee Selby vs Joel Brunker gets two stars. Lee Selby entered this fight with a professional boxing record of 19-1-0 (7 knockouts) and he is ranked as the No.11 featherweight in the world, he suffered his only defeat in 2009 when he faced Samir Mouneimne, since then he has won 15 consecutive fights, the last one against Romulo Koasicha (=Selby vs Koasicha).
His opponent, the undefeated Joel Brunker , has a perfect record of 27-0-0 (15 knockouts) but he is not ranked as he hasn’t fought since August 17, 2013 when he defeated Mike Oliver. Selby vs Brunker, IBF featherweight title final eliminator, is on the undercard of Anthony Joshua vs Denis Bakhtov. Watch the video and rate this fight!