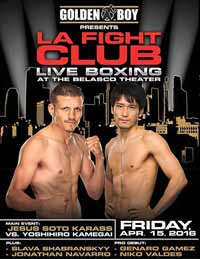 Review by AllTheBestFights.com: 2016-04-15, disappointing fight between Vyacheslav Shabranskyy and Derrick Findley: it gets two stars.

The undefeated Vyacheslav Shabranskyy entered this fight with a perfect boxing record of 15-0-0 (12 KOs=80%) and he is ranked as the No.16 cruiserweight in the world. He fought four times last year beating Paul Parker (=Shabranskyy vs Parker) and Yunieski Gonzalez in his last two (=Shabranskyy vs Gonzalez).
His opponent, Derrick Findley, has a record of 23-18-1 (15 knockouts) and he entered as the No.74 super middleweight. He has already fought twice in 2016 losing to Maciej Sulecki and beating Dezi Ford. Shabranskyy vs Findley is on the undercard of Jesus Soto Karass vs Yoshihiro Kamegai. Watch the video and rate this fight!