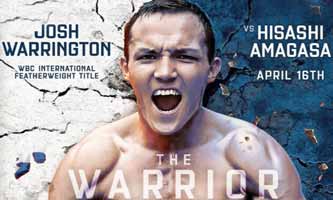 Review by AllTheBestFights.com: 2016-04-16, good fight between Josh Warrington and Hisashi Amagasa: it gets three stars.

The undefeated Josh Warrington entered this fight with a perfect record of 22-0-0 (4 knockouts) and he is ranked as the No.11 featherweight in the world. He fought three times last year winning over Edwin Tellez, Dennis Tubieron (=Warrington vs Tubieron) and Joel Brunker (=Warrington vs Brunker).
His opponent, Hisashi Amagasa, has a boxing record of 30-5-2 (20 knockouts) and he entered as the No.10 in the same weight class (currently the #1 in this division is Leo Santa Cruz). He lost to Guillermo Rigondeaux in 2014 (=Rigondeaux vs Amagasa), but he came back to win in 2015 beating Patomsith Pathompothong and Nathan Bolcio. Warrington vs Amagasa is valid for the WBC International featherweight title. Watch the video and rate this fight!