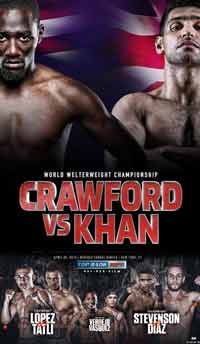 Review by AllTheBestFights.com: 2019-04-20, some good single shots between Shakur Stevenson and Christopher Diaz but it is not enough to get three stars: it gets two.

The undefeated Olympian Shakur Stevenson entered this fight with a perfect record of 10-0-0 (6 knockouts) and he is ranked as the No.27 featherweight in the world. In his last three bouts he has won over Carlos Ruiz, Viorel Simion (Shakur Stevenson vs Viorel Simion) and Jessie Cris Rosales (Shakur Stevenson vs Jessie Cris Rosales).
His opponent, Christopher Diaz, has an official record of 24-1-0 (16 knockouts) and he entered as the No.53 in the same weight class. ‘Pitufo’ Diaz fought three times last year defeating Braulio Rodriguez and David Berna but between these two bouts he suffered his first loss, against Masayuki Ito (Masayuki Ito vs Christopher Diaz). Stevenson vs Diaz is on the undercard of Terence Crawford vs Amir Khan. Watch the video and rate this fight!