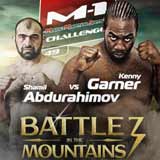 Review: 2014-06-07, something good in the last part of the bout but the first part was pretty boring: Kenny Garner vs Shamil Abdurahimov gets two stars. Kenny Garner entered this fight with a pro mma record of 12-6-0 (83% finishing rate) and he is ranked as the No.53 heavyweight in the world, he comes off three consecutive losses: against Konstantin Gluhov (=Garner vs Gluhov), Damian Grabowski (=Garner vs Grabowski) and Gluhov again in their rematch in 2014 (=Garner vs Gluhov 2).
His opponent, Shamil Abdurahimov, has an official record of 14-2-0 (79% finishing rate) and he entered as the No.37 in the same weight class, he suffered his last defeat in 2011 when he faced Tony Lopez, after that bout he has fought and won twice beating Jerry Otto and Neil Grove. Garner vs Abdurahimov is the main event of M-1 Challenge 49. Watch the video and rate this fight!