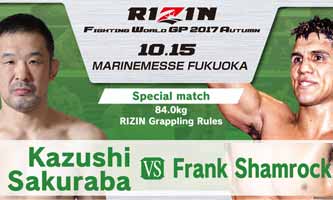 Review by AllTheBestFights.com: 2017-10-15, boring fight between Kazushi Sakuraba and Frank Shamrock: it gets one star!

The 48-year-old Kazushi Sakuraba (4 years older than Shamrock) entered this fight with a professional mma record of 26-17-1 (88% finishing rate) but he is not ranked as he hasn’t fought since December 29, 2015 when he was defeated by Shinya Aoki (=Sakuraba vs Aoki). He was the first man to defeat Royce Gracie in mma history (May 1, 2000) while in 2005 he beat also Ken Shamrock, Frank’s older brother.
His opponent, the former Ufc light-Hw and Strikeforce Mw champion Frank Shamrock, has an official record of 23-10-2 (70% finishing rate) and he is also not ranked as he hasn’t fought since April 11, 2009 when he lost to Nick Diaz. Shamrock vs Sakuraba is a special match with grappling rules, undercard of Rena Kubota vs Andy Nguyen – Rizin FF 7. Watch the video and rate this fight!