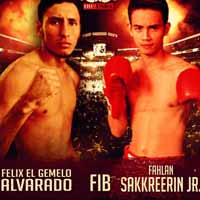 Review by AllTheBestFights.com: 2017-10-14, nice and tough exchanges from the first bell: Felix Alvarado vs Fahlan Sakkreerin Jr gets three stars.

Felix Alvarado entered this fight with a record of 29-2-0 (25 KOs=86%) and he is ranked as the No.10 light flyweight in the world (currently the #1 in this division is Kosei Tanaka). He suffered two consecutive losses between 2013 and 2014, against Kazuto Ioka (=Ioka vs Alvarado) and Juan Carlos Reveco (4-stars fight, Reveco vs Alvarado), but since then he has won eleven bouts beating Karluis Diaz and Jose Antonio Jimenez in his last two (=Alvarado vs Jimenez).
His opponent, Fahlan Sakkreerin Jr (also known as Teeraphong Utaida), has a boxing record of 32-5-1 (17 knockouts) and he entered as the No.21 in the same weight class. He lost to Milan Melindo last year (=Melindo vs Sakkreerin Jr) but he came back to win in 2017 against Oscar Raknafa. Alvarado vs Sakkreerin, IBF light flyweight title eliminator. Watch the video and rate this fight!