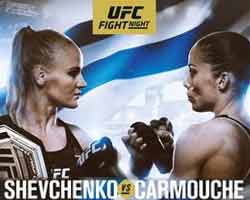 Review by AllTheBestFights.com: 2019-08-10, boring fight between Valentina Shevchenko and Liz Carmouche 2: it gets one star!

The black belt in tae-kwon-do, judo, former Wako, Wmf, Kunlun fight kickboxing and current Ufc champion Valentina Shevchenko entered this fight with a professional mma record of 17-3-0 (71% finishing rate) and she is ranked as the No.1 women’s flyweight in the world. She lost to current #1 Ufc women’s Bw champ Amanda Nunes in 2017 (via split decision, Nunes vs Shevchenko 2) but then she has won three fights defeating Jessica Eye in 2019 (Valentina Shevchenko vs Jessica Eye).
Her opponent, the black belt in Bjj Liz Carmouche, has an official record of 13-6-0 (62% finishing rate) and she entered as the No.2 in the same weight class. She was defeated by Alexis Davis in 2017 but then she has won over Jennifer Maia and Lucie Pudilova (Liz Carmouche vs Lucie Pudilova). In their first fight Carmouche had beat Shevchenko via tko (doctor stoppage – September 30, 2010); this second bout is the main event of UFC Fight Night 156 (UFC on ESPN+ 14). Watch the video and rate this fight!