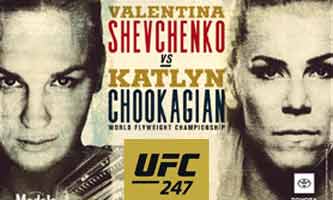 Review by AllTheBestFights.com: 2020-02-08, pretty good finish between Valentina Shevchenko and Katlyn Chookagian but it is not enough to get three stars: it gets two.

The black belt in tae-kwon-do, judo, former Wako, Wmf, Kunlun fight kickboxing and current Ufc champion Valentina Shevchenko entered this fight with a pro mma record of 18-3-0 (67% finishing rate) and she is ranked as the No.1 women’s flyweight in the world. She lost to current #1 Ufc women’s Bw champ Amanda Nunes in 2017 (via split decision, Nunes vs Shevchenko 2) but then she has won four fights defeating Jessica Eye (Valentina Shevchenko vs Jessica Eye) and Liz Carmouche in 2019 (Valentina Shevchenko vs Liz Carmouche 2).
Her opponent, Katlyn Chookagian, has a record of 13-2-0 (23% finishing rate) and she entered as the No.2 in the same weight class. She lost to Jessica Eye in 2018 but then she has won over Joanne Calderwood and Jennifer Maia. Shevchenko vs Chookagian is valid for the Ufc women’s flyweight title (Shevchenko’s third defense); undercard of Jon Jones vs Dominick Reyes – UFC 247. Watch the video and rate this fight!