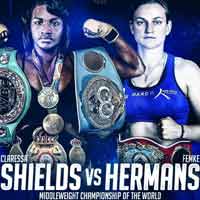 Review by AllTheBestFights.com: 2018-12-08, fight not so exciting between Claressa Shields and Femke Hermans: it gets two stars.

The undefeated 2012, 2016 Olympic gold medalist and world champion in two different weight classes Claressa Shields entered this fight with a perfect boxing record of 7-0-0 (2 knockouts) and she is ranked as the No.1 women’s middleweight in the world. She has already fought three times in 2018 winning over Tori Nelson (Claressa Shields vs Tori Nelson), Hanna Gabriels (Claressa Shields vs Hanna Gabriels) and Hannah Rankin (Claressa Shields vs Hannah Rankin).
Her opponent, Femke Hermans, has an official record of 9-1-0 (3 knockouts) and she entered as the No.5 super middleweight. She lost to Alicia Napoleon at the beginning of 2018, but then she has beat Nikki Adler, Florence Muthoni and Ester Konecna. Shields vs Hermans is valid for the IBF, WBA and WBC World Female middleweight titles; undercard of Cecilia Braekhus vs Aleksandra Magdziak Lopes. Watch the video and rate this fight!