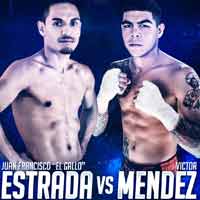 The former Wbo and Wba Flw champion Juan Francisco Estrada entered this fight with a pro boxing record of 37-3-0 (25 knockouts) and he is ranked as the No.2 super flyweight in the world. He has fought twice in 2018 losing to current #1 Srisaket Sor Rungvisai (via majority decision, Srisaket Sor Rungvisai vs Juan Francisco Estrada) and beating Felipe Orucuta (Juan Francisco Estrada vs Felipe Orucuta).
His opponent, Victor Mendez, has a record of 28-3-2 (20 knockouts) and he entered as the No.112 super bantamweight. He was defeated by Arthur Villanueva in 2015 (Arthur Villanueva vs Victor Mendez) but then he has won four bouts beating Alberto Ascanio in his last one. Estrada vs Mendez is on the undercard of Cecilia Braekhus vs Aleksandra Magdziak Lopes. Watch the video and rate this fight!