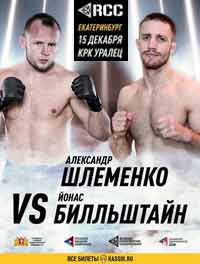 Review by AllTheBestFights.com: 2018-12-15, pretty good finish between Alexander Shlemenko and Jonas Billstein but it is not enough to get three stars: it gets two.

The former Bellator and M-1 Mw champion Alexander Shlemenko entered this fight with a pro record of 56-12-0 (71% finishing rate) and he is ranked as the No.37 middleweight in the world but he comes off three consecutive losses, against Gegard Mousasi (Gegard Mousasi vs Alexander Shlemenko), Bruno Silva (Alexander Shlemenko vs Bruno Silva) and Anatoly Tokov (Alexander Shlemenko vs Anatoly Tokov); before these three bouts he had beat Brandon Halsey (Shlemenko vs Halsey).
His opponent, Jonas Billstein, has an official mma record of 20-5-1 (75% finishing rate) and he entered as the No.57 in the same weight class. He suffered his last loss when he faced Joachim Christensen in 2015, since then he has collected five victories and one draw. Shlemenko vs Billstein is the main event of the Russian Cagefighting Championship 5 – RCC 5. Watch the video and rate this fight!