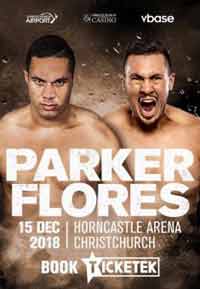 Review by AllTheBestFights.com: 2018-12-15, Joseph Parker vs Alexander Flores gets three stars thanks to a good finish of the fight.

The former Wbo Hw champion Joseph Parker entered this fight with a professional boxing record of 24-2-0 (18 KOs=75%) and he is ranked as the No.10 heavyweight in the world but he comes off two consecutive losses, against current #1 Anthony Joshua (Anthony Joshua vs Joseph Parker) and Dillian Whyte (Dillian Whyte vs Joseph Parker); his last victory was with Hughie Fury in September 2017 (Joseph Parker vs Hughie Fury).
His opponent, Alexander Flores, has an official record of 17-1-1 (15 KOs=88%) and he entered as the No.176 in the same weight class. He suffered his only loss when he faced Charles Martin in 2014, since then he has collected three victories and one draw. Parker vs Flores is the main event of the evening. Watch the video and rate this fight!