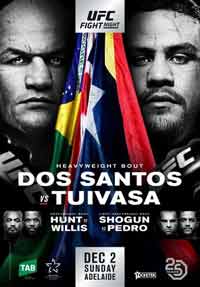 Review by AllTheBestFights.com: 2018-12-02, pretty good fight between Mauricio Shogun Rua and Tyson Pedro: it gets three stars (UFC Performance of the Night).

The black belt in Bjj, former Pride Mw and Ufc light-Hw champion Mauricio Shogun Rua entered this fight with a mma record of 25-11-0 (84% finishing rate) and he is ranked as the No.21 light heavyweight in the world but he comes off the loss against Anthony Smith (Mauricio Shogun Rua vs Anthony Smith); before this bout, in 2017, he had beat Gian Villante (Mauricio Rua vs Gian Villante).
His opponent, the black belt in Japanese jiu-jitsu and kempo Tyson Pedro, has an official record of 7-2-0 (100% finishing rate) and he entered as the No.36 in the same weight class but he lost two ouy of his last three fights, against Ilir Latifi (Ilir Latifi vs Tyson Pedro) and Ovince St Preux (Ovince St Preux vs Tyson Pedro); between these two bouts he beat Saparbek Safarov (Tyson Pedro vs Saparbek Safarov). Shogun Rua vs Pedro is on the undercard of Junior dos Santos vs Tai Tuivasa – UFC Fight Night 142. Watch the video and rate this fight!

(Free embeddable video hosted on Youtube and not uploaded by AllTheBestFights)
https://www.youtube.com/watch?v=SJRVtb-WuYo