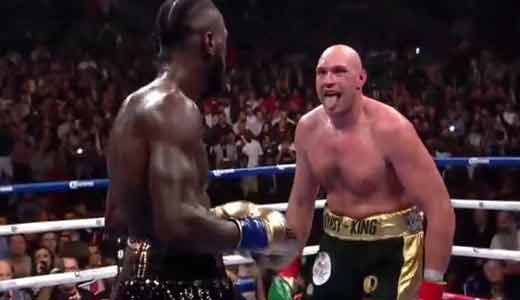 Review by AllTheBestFights.com: 2018-12-01, entertaining fight thanks to a good performance by both boxers and some tremendous shots: Deontay Wilder vs Tyson Fury is one of the best boxing fights of 2018 and it gets four stars!

Both undefeated, the former Olympian and Wbc Hw champion Deontay Wilder entered this fight with a perfect record of 40-0-0 (39 KOs=98%) and he is ranked as the No.2 heavyweight in the world (currently the #1 in this division is Anthony Joshua) while his opponent, the former IBF, IBO, WBA and WBO Hw champ Tyson Fury, has an official boxing record of 27-0-0 (19 knockouts) and he entered as the No.5 in the same weight class. In their last three bouts Wilder has won over Gerald Washington (Wilder vs Washington), Bermane Stiverne (Deontay Wilder vs Bermane Stiverne 2) and Luis Ortiz (Deontay Wilder vs Luis Ortiz) while Fury has beat Wladimir Klitschko (in 2015, Wladimir Klitschko vs Tyson Fury), Sefer Seferi (Tyson Fury vs Sefer Seferi) and Francesco Pianeta in 2018 (Tyson Fury vs Francesco Pianeta). Wilder vs Fury is valid for the WBC World heavyweight title (Wilder’s seventh defense); they also faced each other a second time on Februrary 22, 2020 (Deontay Wilder vs Tyson Fury 2) and a third time on October 9, 2021 (Tyson Fury vs Deontay Wilder 3). Watch the video and rate this fight!