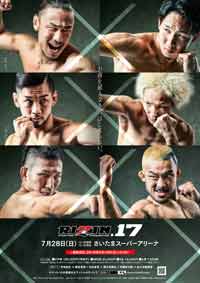 Review by AllTheBestFights.com: 2019-07-28, fight not so exciting between Ivan Shtyrkov and Hoon Kim: it gets two stars.

The undefeaed Ivan Shtyrkov entered this fight with a professional mma record of 15-0-1 (73% finishing rate) and he is ranked as the No.20 light heavyweight in the world. The only man who stopped him in a draw was Geronimo dos Santos last year (Ivan Shtyrkov vs Geronimo dos Santos); after this fight ‘Ural Hulk’ Shtyrkov has won over Fabio Maldonado (Ivan Shtyrkov vs Fabio Maldonado) and Thiago Silva (Ivan Shtyrkov vs Thiago Silva).
His opponent, Hoon Kim, has an official record of 10-12-2 (90% finishing rate) but he is not ranked as he hasn’t fought since Ocotber 28, 2017 when he was defeated by Young Choi; before this bout, in July 2017, he had beat Riki Fukuda. Shtyrkov vs Kim is on the undercard of Yusuke Yachi vs Mikuru Asakura – Rizin 17. Watch the video and rate this fight!