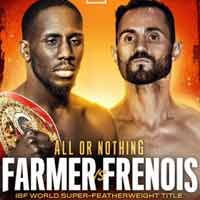 Review by AllTheBestFights.com: 2019-07-27, some good exchanges in the second part of the fight but it is not enough to get three stars: Tevin Farmer vs Guillaume Frenois gets two.

The Ibf super-Fw champion Tevin Farmer entered this fight with a pro record of 29-4-1 (6 knockouts) and he is ranked as the No.5 super featherweight in the world (currently the #1 in this division is Miguel Berchelt). He suffered his last defeat in 2012, against Jose Pedraza, but since then he has collected 22 victories and one no-contest defeating Francisco Fonseca (Tevin Farmer vs Francisco Fonseca) and Jono Carroll in his last two (Tevin Farmer vs Jono Carroll).
His opponent, Guillaume Frenois, has an official boxing record of 46-1-1 (12 knockouts) and he entered as the No.55 in the same weight class. He suffered his only loss when he faced Devis Boschiero in 2013, since then he has collected 15 victories and one draw, against Jono Carroll in his last bout (Jono Carroll vs Guillaume Frenois). Farmer vs Frenois is valid for the IBF World super featherweight title; undercard of Maurice Hooker vs Jose Carlos Ramirez. Watch the video and rate this fight!