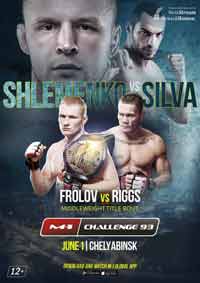 Review by AllTheBestFights.com: 2018-06-01, good exchanges between Alexander Shlemenko and Bruno Silva: it gets three stars.

The former Bellator and M-1 Mw champion Alexander Shlemenko entered this fight with a professional mma record of 56-10-0 (71% finishing rate) and he is ranked as the No.17 middleweight in the world. He fought three times last year beating Paul Bradley (Alexander Shlemenko vs Paul Bradley) and Brandon Halsey (Shlemenko vs Halsey) but then he was defeated by Gegard Mousasi (Gegard Mousasi vs Alexander Shlemenko).
His opponent, Bruno Silva, has an official record of 17-6-0 (82% ko/tko victory rate – he has never won via submission) and he entered as the No.101 in the same weight class. ‘Blindado’ Silva lost to Moise Rimbon in 2016 but then he has won over Matheus Mussato and Gennadiy Kovalev. Shlemenko vs Silva is the main event of M-1 Challenge 93. Watch the video and rate this fight!