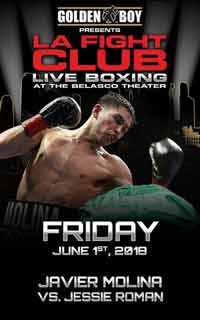 Review by AllTheBestFights.com: 2018-06-01, fight not particularly good between Javier Molina and Jessie Roman: it gets two stars.

The Olympian Javier Molina entered this fight with a professional boxing record of 17-2-0 (8 knockouts) but he is not ranked as he hasn’t fought since January 19, 2016 when he was defeated by Jamal James; before this bout, in 2015, he had beat Lenwood Dozier.
His opponent, Jessie Roman, has an official record of 22-3-0 (11 knockouts) and he also lost once in 2016, against Eddie Ramirez; after this fight he has won over Luis Joel Gonzalez and Erick Daniel Martinez. Molina vs Roman is the main event of the evening. Watch the video and rate this fight!